skip to main | skip to sidebar

The GOBSMAKT! is alive...by now you have seen that both Ade and Neil have fantastic blogs (click 'em, you need them), so I thought I'd post something fun.
Years ago I was looking high and low for a job and saw a listing for submissions for a book called SNOW NINJAS. No outline, but I got the impression the publisher wanted something sort of serious-but I couldn't quite figure out how to keep that title and apply much Sturm und drang to it.  So, I did a little homage to the kung fu films I love, dunked in a snowglobe. With Ninjas.  And the 18 Bronzemen.  And...well, some dialogue that makes me chuckle.
There was one other twist. The publisher said he needed it ASAP. Like, within the day.  I can do that right? It might not be perfect, but it was written in two hours and I had a blast with it.  Thanks to my finally unpacking an ancient hard drive from my last move, I have it to read again.
I got back that it wasn't what they were looking for, but it was fun to write and some of the ideas really make me smile.  The book was eventually published, and it looks a bit more G.I. Joe than I could have written it.  But I think I'm going to have to buy a copy via Comixpress to check it out!  I mean, it has only been almost 5 years...

Here are some ninjas. In the snow. Fighting. The way I would write it. 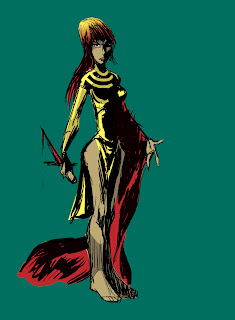 For all you fans of Warrior Queens !
A
Posted by Ade Salmon at 4:52 PM 1 comment:

The Claws of Frankenstein Island

Hello there Gobsmakt! Friends... Not being an artist, I thought it would be fun to share a sort of sketch. While working on a batch of short stories recently I was stung by the ever present scorpion in my subconscious, THE CLAWS OF FRANKENSTEIN ISLAND. This story is THE one I want to do, a tribute to the horror flicks from the Philippines, Guy N. Smith, professional wrestling and well... a few other surprises. Here is a draft of the "pre-credits" sequence that I think really catches the tone of the story.
Fire up your Mad Doctor of Blood Island soundtrack (what, you don't have that?) and check it out. Monsters, mayhem and more on the way!


Don't trade your pistol for a coffin amigos!
-David Z 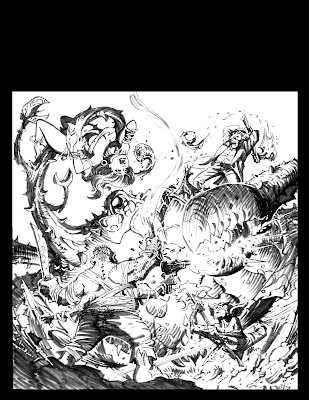 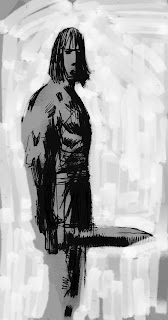 One of my primary joys in life is watching BIZARRE films. Don't believe me? Check out my blog for more.
Anyway, another joy is writing about them. A Boston theater was showing a bunch of oddball midnight movies and I was really happy to be asked to write the program notes for a movie that really started a lot of my film obsessive behavior... VIDEODROME.
But I could not stay on the film note path very well. Thankfully, it was a big hit with the programmers and did not get edited out. Instead of discussing the thrilling characters, sly social commentary or grueling atmosphere of dread I decided to take it more as a personal look through the virtual helmet.

Click for fullscreen on the Issuu document below and enjoy my slightly different take on Videodrome. 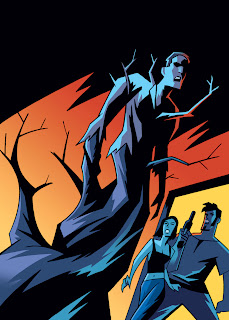 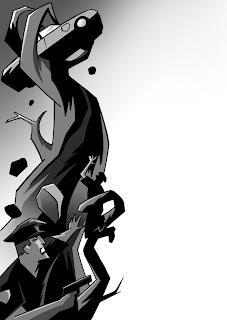 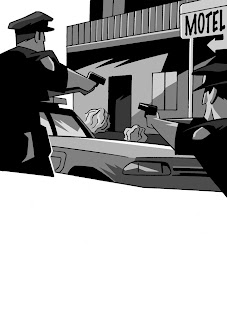 Here's the cover and interior story art I did late last year for the Filthy Creations writers mag. It's a small press zine out soon i believe and I figured I'd help out. I was given a flash fiction piece that reminded me in flavour of the Twilight Zone episode. I didn't want it to be a straight period illo - but I was aiming for a retro feel. This is my style at it's most *animated* I guess. Recently I've been trying to claw back some realism into my stuff so it's interesting for me to look at these pieces with fresh eyes. I like the approach but there is a tendancy with stylistic cartooning to lose a spark of reality at times. 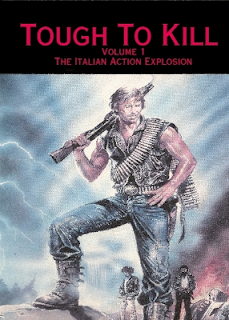 As the post head says... I'm TOUGH TO KILL! Well, not just me, but my writing cohort Paul Cooke as well. It took almost 5 years to track down copies of all the films we were looking for, but after obscene postage bills, hundreds of hours of viewing and reviewing we put out the opus that a few people wanted. Well, six or so as far as we knew... Tough To Kill digs deep in to the world of Italian Action films made in the 1980s. Rambo clones! War films! Bizarre Cross Dressing Warriors!!
And yeah, I'm pretty proud of it... I've yet to read one bad review, much to my shock-even getting nice notes from big sites like Bookgasm with this super cool review from Louis Fowler.
I can't say I ever imagined co-writing a "seminal textbook" on a tiny genre...but I'll take it!

You can preview the book (oh, and buy it) here:

But this is the studio page and there is a tie-in. There always is, because I'm very very lucky to have lots of talented friends. Included in Tough To Kill is the April Fools Day joke that Paul wrote and I put together a wacky mini-poster for that actually lives on in forums with some people claiming to actually HAVE the movie! We also explain that it is not real and nudge those collectors of the obscure that "have" it just for fun. So, I wanted a faux viddy box of course-and who better for monsters and futuristic rebels than Vokes? Who better to design the BRONX CRACKDOWN?
Nobody!

Schedules got tight and I had to fudge it all in the end (and poorly at that), but I saw the design on the board over in the Vokes Studio once and it stuck in my head. Here they are! Check out the little video box...cool.

Don't trade your pistol for a coffin amigos!
-David Z 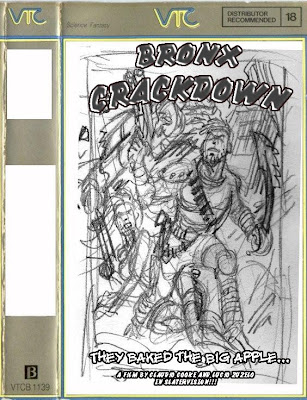 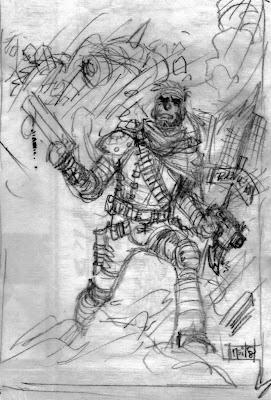 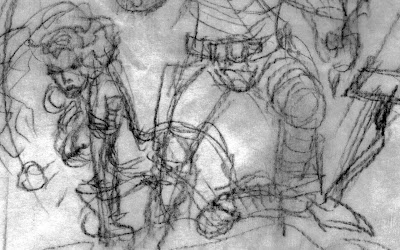 BTW the name Gobsmakt Studios & all artwork/text is of course copyright by Vokes/Salmon/Zuzelo 2009.
In those cases when a licensed character/property is presented it is copyright to those particular companies.